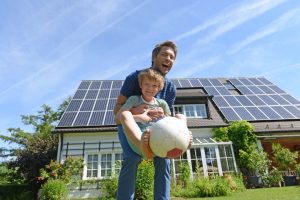 How much energy does a photovoltaic system take to produce? What is its carbon footprint? These questions come up again and again in discussions about the energy transition and the expansion of renewables. However, the myth persists that solar power systems take more energy to produce than they generate during their lifespan. This statement is definitively untrue.

Absolutely positive ecobalance
The energy payback time is the term for the number of years that the system has to be in operation to generate the same amount of energy that was used for its manufacture. This takes into account not only all the system’s components, but also the energy consumed for recycling them. The energy payback time of PV systems is dependent on the geographical location: PV systems in Northern Europe need around 2.5 years to balance the input energy, while PV systems in the South equal their energy input after 1.5 years and less, depending on the technology installed.

The greatest proportion of the energy is required for the solar modules. These have a lifespan of 20-30 years. This means that a modern PV system actually generates at least 10 times more energy during its lifetime than was required for its manufacture.

In other words, assuming that a 3-kWp solar power system generates 3,000 kWh of electricity per year, it will save on average 1,992 kg or 1,992,000 g of CO2 per year. A typical medium-sized diesel car produces CO2 emissions of approximately 180 g/km. You could drive 11,067 km, therefore, before this car has emitted the quantity of CO2 saved – that’s one journey from Munich to Mumbai.

IBC SOLAR takes its share of the responsibility for developing photovoltaics as a “green” industry and is a member of take-e-way – a system for taking back electrical equipment. The European WEEE Directive (Waste Electrical and Electronic Equipment Directive) obliges producers to take back and recycle at least 85% of PV modules free of charge. take-e-way offers consumers and installers a network of disposal points for free return of old solar modules. So the modules go on conserving resources even after the end of their service lives.