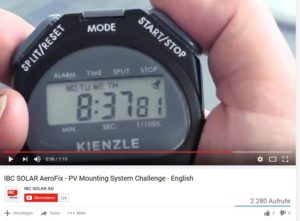 How long does it take to set up mounting systems for photovoltaic systems? We entered our IBC AeroFix into a race test conducted by the specialist magazine Photovoltaik.

“A record in every class” – was the verdict of the Photovoltaik magazine on our mounting system IBC AeroFix. For a test report in the edition of 11/2013, IBC SOLAR product managers Tobias Zipf and Andreas Ullrich set up an assembly challenge and built a flat roof system against the clock. With an installation time of well under nine minutes for the frame and eight modules in a southerly orientation, both the journalists and the experts from the DGS were completely blown away by the qualities of IBC AeroFix.

Admittedly: The challenge did not take place on a roof, but instead on solid ground at our competence center in Bad Staffelstein. The two product managers also had the opportunity beforehand to train an experienced team for the assembly. However, IBC AeroFix also proves it’s worth under real roof conditions as shown by a number of photovoltaic projects that have been built this year using the system – from Husum in Northern Friesland to the foothills of the Austrian Alps. IBC AeroFix makes the work of technicians significantly easier with its sophisticated modular design. The Photovoltaik also came to this conclusion in their test report.

Why don’t you see for yourself! What editors and experts were able to experience in nine minutes, we have summarised for you in a one-minute-video: