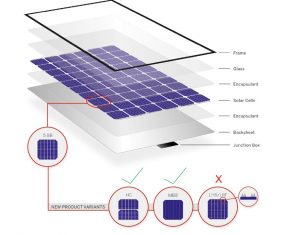 The photovoltaic market has increased significantly over the last decade. In 2015, the annual PV installation was over 50 GW and the solar cells made with Multi Crystalline Silicon (mc-Si) had a market share of nearly 60 %. This year, however, the majority of European countries noticed a significant switch to Mono Crystalline Silicon with ratios of ~70 % in comparison to 30 % mc-Si. Regardless of the technology, one aspect is absolutely clear: the market is still going the direction where customers worldwide require higher efficiencies. The prices, however, have to stabilise or should get lower. By fulling this demand, cell and solar module producers are required to provide a solution to offer higher efficiencies at the same or lower level of prizing. In Sep 2018 we introduced you to our new module technologies which includes Half Cell, Multi Busbar or optimized cell connector like LRF. This time we want to take a closer look the Cast Mono technology.

With reference to the worldwide market share, solar modules based on Crystalline Poly/Mono (c-Si) material have a market share of ~90-95 %. This won’t change in near future. Also in the upcoming  years, c-Si material will dominate the market. In this context, the PV business in general is striving for an ultra-low price PV-Era. Latest announcements in September like “Japans fourth solar auction with lowest bid of $0.098 / kWh”, or in October with “Dubai´s 900 MWp solar tender sees lowest bid of $0.0169 / KWh” shows a significant trend. Photovoltaic is becoming the cheapest technology to provide electricity worldwide.

The technology can be developed into two main types. First of all, there is the so called “Czochralski method”, where single bulk crystals are realized. The second method is so called “Cast technology” where multi-Silicon (mc- Si) is growing.

With the “Cast Mono technology” (also known as Mono Cast seed cast, quasi mono or mono-like) the crystal quality can be increased in comparison to the standard multi-material. The Cast Mono method provides single c-Si ingots with the use of almost the same systems as those used for growth of mc-Si ingots. By doing this, a significant amount of multi production capacity can be used for the production of this material. The main difference to the Mono ingot growth process is the use of a mono seed layer, which will be implemented with a <100> orientation single crystalline into the existing casting method for standard multi material. Except for the seed crystals, the same materials as the growth of mc-Si ingots can be used for the cast, its coating, the Si raw materials, and flow gases.

In addition, the price structure is slightly higher in comparison to standard multi material.

Customers have to be informed that with the current technology the optical crystal structure is almost the same to Mono material. Nevertheless, in some cases there could be still some “visible blue strikes”. Thus, this module type is ideal for commercial projects. However, if customer would like to use Cast Mono modules also for residential applications, they have to consider the possible optical crystal structure.