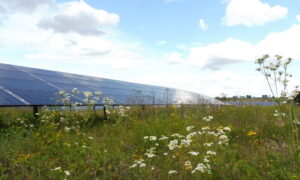 When it comes to available land that could be considered for the construction of a solar park, it doesn’t always have to be a field in the middle of the countryside. In fact, many types of land, such as landfills or conversion sites, come into question. One example is the former gravel pit north of Meyenburg in Brandenburg, Germany. For years, the area was a wild dumping ground, but now the piece of land shines in new splendor: with a solar park, including extensive green maintenance measures – and flora and fauna also benefit from this to a great extent.

Since the gravel pit in Meyenburg was closed down in 2006, nothing had happened for a long time on the almost 98,000m² site. In particular, the green area gradually ran wild and became a wild dumping ground over the years. For the environment and the fence lizard native there anything but advantageous. That’s what the project planners at IBC SOLAR thought, too, and since 2012 they have been campaigning for the construction of an open-space solar park. No sooner said than done – on the once overgrown site, approximately 28,700 modules in both south and east-west orientation now provide green power generation. The solar park has a total output of around 7,500 kilowatt peak (kwp) and supplies around 7,313,700 kilowatt hours of electricity per year. This not only saves 4,271kg of CO2 per year, but is also equivalent to the annual electricity consumption of 2,570 three-person households.

However, it is not only the local residents who benefit from the construction of the photovoltaic system, but first and foremost the environment. Gone are the days of indiscriminate and careless littering on the site. The plant has also created numerous compensation areas in nature. Directly at the module field between the rows, as well as in the surrounding surface areas, a total of 50 habitats of stones, root stumps, brushwood and sand were created, which serve as a retreat for the already resident sand lizard, but also for the settlement of other reptiles. In addition to a 2500 m² shallow water body, which was created as a habitat for amphibians, native, site-appropriate shrubs were also planted at the edge of the forest. This will allow the flora and fauna to recover over the next decades without the use of fertilizers, pesticides or herbicides, which are often used on agricultural land.

To ensure that overgrowth is prevented in the future and that the yield of the solar park is secured, the O&M department of IBC SOLAR is on site with numerous maintenance measures. In addition to mowing in sections with consideration for ground nesting birds, regular pruning of woody plants also contributes to keeping the habitats free and thus to further positive development, which is recorded by monitoring over the years. In addition, the team is in close coordination with the nature conservation authority and various associations to ensure conservation.