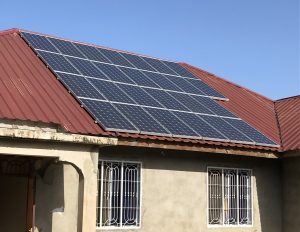 The association Connecting Continents e.V., based in Kirchroth/Germany, has been running a secondary school on Pemba, a small island belonging to Zanzibar/Tanzania in East Africa, for 15 years. A total of 300 pupils, half of them girls and a quarter orphans, attend the school, which is one of the best in the region. The school has been under the direction of headmistress Mrs. Bi Mwaache for many years. Together with her team, she helps students to obtain a state-certified degree every year. In order to concentrate even better on her work with the students, Mrs. Mwaache and her family have recently moved into a freshly finished house only 1 km away from the school. But the electricity supply in the region is very unreliable. Therefore, a photovoltaic system with a battery storage system has recently been installed, which supplies the family with CO2-neural solar power.

For many of the children, the Secondary School on Pemba run by the Connecting Continents association is the only possibility to obtain a school diploma, as state schools are expensive. The association itself has 25 local employees, the rest of the work is done by volunteers. Former students are also happy to support the institution and to help out after their vocational training – be it as teachers or craftsmen. In order to be able to respond even more to the needs of the students, the headmistress of the school decided to move and has rec 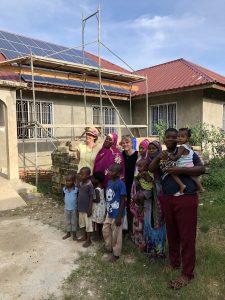 ently started living with her family near the school. However, problems with the power supply soon became apparent. The headmistress’ 15-person household not only had to deal with regular power cuts, but also had to cook with charcoal. But thanks to the commitment of Connecting Continents, Mrs. Bi Mwaache is now the proud owner of a photovoltaic system with battery storage, which supplies the family with self-sufficient and CO2-neural solar power. The components for this system were collected from donations from various companies, including ourselves at IBC SOLAR. The system house supplied the batteries and the corresponding power inverters.

Together with former and current students, who learned more about the technology and assembly of photovoltaic systems during the installation, the system was completed in only 9 days despite adverse working conditions. The house now has not only a washing machine and soon also power-saving LEDs, but also an induction hob, which will enable the family to cook without charcoal in the future. And thanks to the battery storage, the residents are now also independent of the fluctuating electricity grid. The school itself also benefits from the installation: Since the start of operations, Ms. Mwaache has been paying 5 cents to the school for every kilowatt hour of electricity generated.

The school itself has been energy self-sufficient since the beginning of 2005 with a 13 kWp PV system and a 55 kWh storage system. Solar power is also used to supply drinking water to the school and part of the village via a 50 metres deep well. Rainwater is collected in a 55 cubic metres cistern and used for the toilets and the school garden. The wastewater is treated by a reed bed treatment plant.