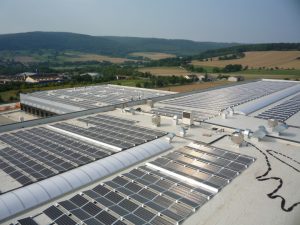 Flat roofs are particularly well suited for the installation of PV systems. There is no question about that. Especially if a lot of PV power is required. But in times of recurring storms and hurricanes, these systems have to withstand a lot. In order to find out exactly how our proven and wind tunnel tested AeroFix system behaves in these extreme situations, we recently started video and sensor monitoring on a commercial roof in Hedemünden, southern Lower Saxony. In the first article we told you more about the background. Now we report in detail about the system and the test setup.

Extreme situations can never be represented in tests as they are in reality. Although our IBC AeroFix mounting system has withstood the odd hurricane in the past year, there is no official documentation of this. At the same time, this wind load monitoring over 10 years also provides us with valuable information. The aim: to detect and repair possible damage to the anchoring of the PV system caused by high wind loads at an early stage.

For our long-term documentation, a logistics entrepreneur from Hedemünden made his commercial facility available to us, which has already been in operation for about seven years. The building is located directly next to a motorway. The site corresponds to category 2, a so called “agricultural area with individual houses or trees”. One of the reasons why this building is so well suited for our test is the high-bay warehouse, which is right next to it and therefore has a great influence on the wind loads. The logistics company’s PV system has an output of almost 1 megawatt and consists of around 4000 modules. The AeroFix system is mounted in a 10-degree east-west orientation at a height of about 12 metres. The roof has a slope of two degrees and is a foil roof.

For the planning and installation of the video and sensor surveillance, we were supported by the company Acomm from Bad Staffelstein. The roof area with the highest wind loads was selected for monitoring. As mentioned at the beginning, the high-bay warehouse next to the building also plays an important role here. A miniserver, two network cameras, two weather stations, two ultrasonic sensors and 600 m of cable were installed. In this context it was important to ensure that the surveillance systems were not structurally anchored in the existing building shell.

In order not to run the risk of ending up with a lot of unusable video material, the cameras record in a continuous loop. The recording is only saved when a limit value is exceeded. However, recording begins a certain time before the limit is reached. In order to see at the same time how the system works over the years, four additional pictures are taken every day at regular intervals.

We are already very excited to see the performance over the next weeks and months and will of course report on our blog.