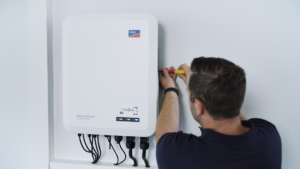 The SMA Sunny Boy Smart Energy Hybrid inverter – This name might sound familiar to some people. Almost 10 years ago, SMA already ventured into this segment with this innovative inverter and storage combination. But it turned out that the market and the functions of the product were not yet ready. But now with full momentum and a new start, SMA presents the new Sunny Tripower Smart Energy Hybrid inverter.

The new SMA centerpiece defines a compact 2-in-1 solution for the efficient use and storage of solar power in private households, up to smaller commercial use cases or multi-party households. Whether for new systems or also for retrofitting existing SMA systems with a battery storage system – the new inverter is versatile!

Simple and plain in the familiar SMA design. This is how the SMA Sunny Tripower Smart Energy presents itself in the power classes from 5.0, 6.0, 8.0 to 10.0 kVA. With the integrated, automatic backup power function, selected loads can be permanently supplied with power – thus all necessary consumers are ensured even in the event of a grid failure. An external mains switch box is thus not required – however, the maximum through current of 3x20A must be strictly observed here.

Another big bonus: The SMA Sunny Tripower Smart Energy masters the whispering sound like no other, because with a noise level of less than 30 dB, it is extremely quiet.

Once unpacked, the new hybrid inverter is quickly & easily installed in the right place and wired in no time using the easily accessible external connections. The included pre-assembled 3m battery cable with MC4 connectors facilitate the connection of the compatible high-voltage battery.

This new 3-phase hybrid inverter can also be quickly and easily integrated into the SMA system world as usual. With the help of the SMA 360° App, the device is automatically recognized by scanning the QR code printed on the housing. The digital commissioning wizard provides assistance. Don’t worry, commissioning can also be carried out using a laptop thanks to the built-in Ethernet interfaces. True to the motto – keep it simple!

However, the new SMA highlight only shows its full strength in combination with a compatible high-voltage storage device. With its high, maximum charge and discharge current of 30A, particularly fast charging and maximum battery utilization is possible even in changeable weather conditions.

At market launch, the list of compatible high-voltage battery storage units is limited to the well-known BYD HVS and HVM versions. As of the second half of the year, additional batteries are expected. Among them the LG RESU Flex and other partners.

In times of the energy transition, it is now almost standard practice to efficiently network all available energy sources in order to reduce fossil fuels. SMA also offers a solution for this, namely with the Sunny Home Manager 2.0. In addition to the battery storage, known heat pumps, heating rods (my-PV), wallboxes (SMA) or other household appliances can hereby also be intelligently integrated in the SMA system. That pleases!

Enough of the theory – now the SMA hybrid inverter has to show its muscles in practice. And we are convinced that it will do so! Click here to go directly to our Online Shop!

Note: Certification for countries outside the DACH region, the Netherlands and Belgium will take place in the second half of 2022.