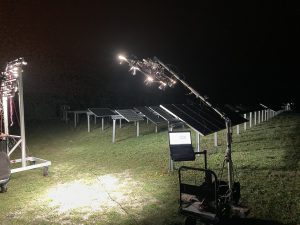 Science does not only take place during the day in the laboratory, but from time to time also at night. In the PV sector in particular, there are also often so-called outdoor measurements on site. For example, in addition to their work in the laboratory, the scientists at HI-ERN (Helmholtz Institute Erlangen-Nürnberg) also carry out these kind of measurements in the form of experiments and test series using existing PV systems in operation. As a result of current research activities in a joint German project, funded by the German Federal Ministry for Economic Affairs and Energy, two prototypes for outdoor photoluminescence measurements were recently evaluated on a wide variety of module concepts at our test facility in Bad Staffelstein.

Even if it seems unusual at first glance, investigations of PV modules at night are quite common. Especially with special outdoor measurements, such as in our prototype test, it may be necessary to carry out investigations at night, as the sunlight would impair the measurement too much during the day. In this case, it is advantageous for the investigations if these test series take place directly at connected outdoor systems. This is because measuring the modules on site prevents possible transport damage to the modules and the throughput (the number of modules tested per minute) is much higher, since the modules do not have to be uninstalled and reinstalled for the test series. In addition to the time saved, the cost of a test is also kept within reasonable limits.

The most recent outdoor test was carried out at IBC SOLAR in November 2020 together with our cooperation partners greateyes GmbH from Berlin who provided the second photoluminescence prototype as part of the project. Both prototypes are based on the use of very intense light with a defined spectrum directed at the modules. The optical response of the modules at different wavelengths is examined. The aim of the experiment is to obtain a further method for the detection of defective modules, which is faster and cheaper than comparable examination methods. The measurements required for this were carried out on two consecutive nights. The data was then evaluated at FAU (Friedrich-Alexander-Universität) and at the HI-ERN Institute. This showed that defective modules can indeed be reliably detected with the help of this method.

“Accordingly, our new photoluminescence setup can certainly be used as an alternative to existing measurement methods for photovoltaics,” says Bernd Doll, a doctoral student and junior scientist who was also financially supported by IBC SOLAR AG during the night measurements as part of the project. As part of his involvement in this project, he was awarded the prestigious InterSolar Student Award in the summer of 2020 (we reported). “For anyone who wants to investigate faults in PV systems, such a method can be very useful”, says Doll.

We are pleased that IBC SOLAR is actively working on research projects and solutions here through the great commitment of three employees, in addition to their day-to-day business, in order to set new standards in the industry in the future. 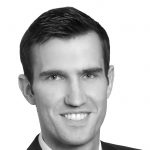