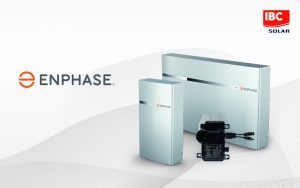 “This is really easy!” – was the conclusion of an IBC SOLAR colleague when setting up our small Enphase laboratory test system. Yes, the Enphase storage systems can do a lot. However, the simplicity of the system was one of the main reasons for IBC SOLAR to add it to the portfolio at the end of April. But what actually makes the system so special and how is the setup, commissioning and operation of an Enphase PV system with the new Encharge storage system? That’s exactly what we want to look at in this two-part blog series. To start with: For the test setup, we converted one of our colleague’s string systems to an Enphase system including the new Encharge storage. But first, let’s get to the basics and the individual components:

The special features of Enphase

The structure of an Enphase system differs significantly from a “conventional” string system. Instead of a central inverter, each PV module has its own small inverter. The inverter is mounted on the substructure or on the module frame, below the modules. The advantages are obvious:

At the same time, the system can be expanded for life without any problems by connecting additional module inverters in parallel. It is therefore a future-proof investment for the customer, even if, for example, the garage roof is added as a PV surface at a later date.

Thanks to the modular concept of the system, almost any system size can be realised with Enphase. Only a few different components are needed for this.

The components of our Enphase test system

The actual inverters are the IQ7 devices, which are currently available in four different power classes. Since PV modules of different strengths are installed in our example system, the IQ7 and IQ7+ inverter types are used here.

On the AC side, the inverters are connected with the pre-assembled Q-Cable, which is available in a single-phase and a three-phase version (depending on the size of the system). In addition, there are different Q-Cable variants, depending on the desired plug spacing. Since our example system has a generator output of 9.6 kWp, a three-phase design is necessary here.

Due to the fact that no moving parts are installed in the inverters, the so-called Q-relay is still necessary as mains and system protection in the system in order to comply with VDE-AR 4105:2018. This is mounted on the top-hat rail in the sub-distribution. Since we want to set up a three-phase system and connect an Encharge 10T battery, two three-phase Q relays are planned.

The brain of the system is the Enphase Envoy S metered. This device is also designed to be mounted on the top-hat rail and performs the following tasks in the system:

As a novelty, the new Encharge 10T storage system from Enphase will be installed for the first time for IBC SOLAR. This is a 10.5 kWh battery with LFP cells, which is connected to the house grid via AC. Enphase microinverters are also used in the battery (already the next “IQ8” generation). The battery consists of a wall mount, three 3.5kWh battery modules, connecting cables and a casing. It is connected to the house mains as standard with a single-phase connection. A three-phase connection set is in preparation.

The Envoy communicates with the battery using the Zigbee radio protocol. This requires the so-called COMMS kit, which we connect to the Envoy via USB port.

From our point of view, the battery has the advantage of a smooth integration with the Enphase system. In addition, the flat size and the modular concept stand out. The system can be extended for life with further Enphase batteries as soon as the demands of the system owner increase. In addition, from the end of the year it will be possible to set up a backup system with the upcoming Enpowerbox.

Although the AC connection is an advantage in terms of expandability and modularity, the system does not achieve quite as good efficiency levels as high-quality hybrid inverter-storage combinations. In our eyes, however, the stated Rountrip Efficiency of 89 percent is very good for an AC system.

In addition, a little more cabling is required for installation than, for example, with the DC solution from BYD. However, the test setup also shows that the installation time is nevertheless pleasantly short and commissioning is very uncomplicated.

So much for the background information and the components. In the next article, we will tell you all about the installation and commissioning of the test setup and give you a conclusion….by the way, the Encharge storage system won the ees Award (electrical energy storage) this year, making it one of the three most innovative products in 2021.