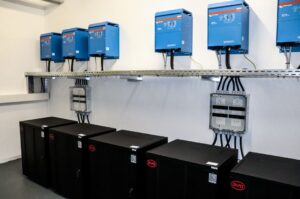 Since the founding of IBC SOLAR, we have of course not only equipped our customers with complete PV systems, but also invested in our own in-house system. And that has grown steadily over the years. Part 1 of the blog series on photovoltaics at IBC SOLAR was dedicated to a rough overview of the entire system and our motivation. Part 2 now takes a first detailed look at a specific section of our system: the cluster of battery inverters and battery storage. It consists of a total of six Victron Quattro 48/10000 as well as five BYD Battery-Box Pro 13.8. The storage units are thus low-voltage storage units, resulting in a total usable capacity of 69 kWh. The storage system at IBC SOLAR headquarters has now been providing its services for more than two years and supports us on a daily basis in various applications.

One application that can significantly shorten the amortisation period of a storage system, especially in the commercial sector, is the use of peak shaving. Compared to residential customers, commercial customers with an annual consumption of 100 MWh/a or more pay not only for the kWh supplied, but also for the highest load peak in a 15-minute interval per year. If you have consumers with high power consumption at your site, for example a large machine or a charging station that requires a lot of power in a short time, so-called load peaks can occur during the course of the day. If these cannot be absorbed, the total annual electricity costs can rise enormously. The amount of the power charges to be paid depends on the regional grid operator and can vary greatly throughout Germany.

This is now also an issue for IBC SOLAR. With more than 10 charging points at our headquarters – and rising – as well as a large number of electric vehicles in our own fleet and at our customers’, a high peak load can occur at times due to e-mobility. With our in-house energy management system, we therefore control the maximum grid consumption during our business hours by means of the storage unit, thus limiting the grid fees that have to be paid.

The so-called “multi-use” of the same storage system for different applications, such as peak load capping and self-consumption optimisation, results in an additional revenue stream for the same investment and thus we can further improve the overall economic efficiency of the storage system. 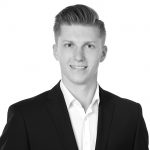